Church Songs for the 21st Century

Very special guests confirmed include Jacob Lekkerkerker on organ and the amazing Bulgarian Voices of the Pauni Trio. Furthermore, Cafuné (Brazilian), Çiğdem Okuyucu,(Turkish), Daphne Chlimintzas (Greek), Marianne Svasek (Dhrupad) Marije Nie (tap), Marieke Franssen and Mark Alban Lotz (flutes). All our guests will engage with the Genetic Choir in vocal instant composition and we will of course work with the special acoustics given by the church space. 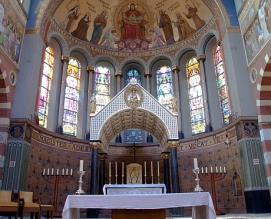 You can buy our new CD “Church Songs for the 21st Century” at the concert or here on the website.

‘From writings of the Church fathers and other reports, it is unequivocally clear that the rites of worship of the early Christians were marked by a religious ecstasy that manifested itself in unhampered, purely emotional, spontaneous expression. From the earliest time onward there is copious documentary evidence of the extensive part played by improvisation throughout the development of all church music. In vocal music, improvising on all the intervals and internal combinations appearing in Gregorian chant was systematically practised by singers and choirboys. Later, instrumentally, there is evidence that musicians such as the 14th century blind organist Francesco Landini became well-known for their improvising abilities.’ (taken from Derek Bailey: Improvisation, its nature and practice in music (1992, p29)

The Genetic Choir is…

- a vocal ensemble based in Amsterdam that sings fully improvised concerts, preferably in unusual locations or venues.

- a research garden that is open for people of any background and degree of training to discover their voice and develop with us the craft of vocal instant composition through workhops and sessions.

- a utopian idea & hands-on method for creating meaningful music as a large organism of free agents, without a conductor or composer.

4x a year we send out our